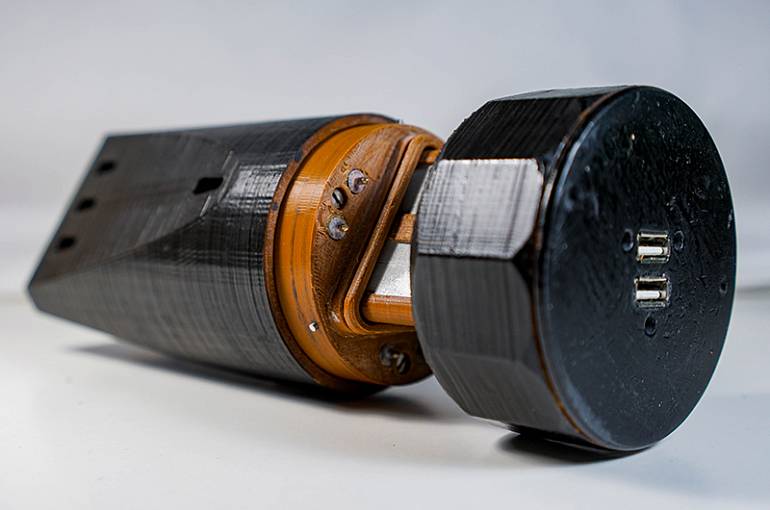 Russian startup AL Technologies is developing environmentally friendly power sources that generate electricity from aluminum. One of the devices is created for those who care about the environment and love to be in nature. With this device, clean energy will follow you wherever you go.

It’s worth explaining right away that a portable aluminum-air power source (let's call it “aluminum source” for short) should not be confused with a conventional power bank: it does not need sockets, as it does not accumulate power, but generates it itself.

The aluminum source is very convenient if you go on a long hiking trip. Imagine you took a charged powerbank with you and used it on the second day of a weekly hike, the rest of the time you will have to carry useless weight with you. With an aluminum source, things are different: in order for it to start working, aluminum plates are placed in a special cell inside - the fuel cell - and the electrolyte is poured - salt in water. This means that you can install the plates in advance, and during the trip just add a spoonful of edible salt, pour water from the nearest stream or flask - and you can charge your smartphone, navigator, walkie-talkie and any other portable travel equipment.

In fuel cells, a chemical reaction begins between aluminum, water and oxygen coming from the air through a special membrane in the wall. The result is electric current and heat. For example, from just 25 grams of aluminum and half a glass of electrolyte, you can get about 50 Wh of electricity. This is enough to charge 4-5 iPhones 5.

During the reaction, white clay is produced - aluminum hydroxide. It is a non-toxic and safe substance that is found in the soil and is widely used in a wide variety of industries.

When the fuel (aluminum or water) has run out, the formed substance can simply be poured out, rinse the device, refill with a new fuel supply, which will take only a couple of minutes. Aluminum is consumed more slowly than water, so one set of plates can be enough for several fillings of water with salt.

A working aluminum-air power source does not make noise and does not produce any exhausts, including carbon dioxide. And unlike other environmentally friendly current sources used today, for example, solar panels, it does not depend on the weather, and the heat generated helps it work even at very low air temperatures.

Back in 2018, AL Technologies engineers implemented a prototype of a tourist power source. The first attempt was carried out by means of 3D printing and had a purely experimental character. It was assumed that such a source the size of a thermocup could charge up to 10 smartphones on one set of plates weighing 50 grams.

Performance did not disappoint, but ergonomics and reliability must be further developed, as it turned out as a result of the first laboratory tests. However, the very idea of ​​such a device was warmly received by potential consumers at the recent Startup Bazaar 2019 exhibition in Skolkovo, in which AL Technologies participated, which definitely gives developers an incentive not to close the project completely.

Aluminum-air power sources are a universal technology that theoretically can be adapted to any power up to the scale of a power plant.

But now, as the first product, AL Technologies engineers are developing a current source the size of a system unit for low-power (up to 500 W), but long-term (up to 2 weeks) power supply of industrial equipment. This is very important when it is not possible to often “visit” the current source for refueling. Such a strategy was chosen because of the great interest in this particular source.

Laboratory research in the field of aluminum-air power sources has been going on since the 90s of the last century, but there is still no consumer product on the market. A special contribution to the research belongs to the scientific group “Electrochemical power sources” of Moscow Aviation Institute, which includes co-founder and head of AL Technologies Konstantin Pushkin.

The company was founded in 2017 and soon became a Skolkovo Innovation Center resident. The startup has already seen interest in its first product, and also received a Skolkovo grant for its development. By 2020, the first product should go into mass production. At the same time, it is planned to begin finalizing the tourist power source.

The global goal of the company is to implement the technology of aluminum-air power sources into a number of products with different capacities that can bring real benefits to people.